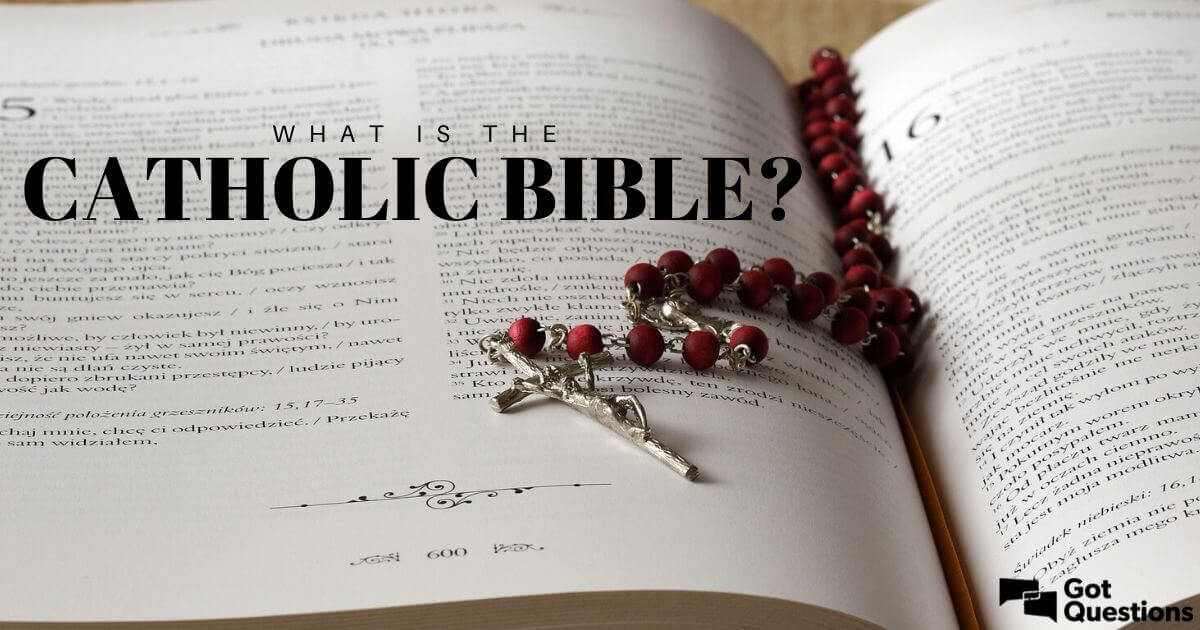 Overview of the Catholic Bible and Common Questions about the Bible

Editor’s Note: In this week’s Pastor’s Corner video Fr. Jim walks us through some counsel from Pope Francis on how to approach scripture, making it the bedrock of our life. In keeping with that, we thought it would be helpful to offer you some facts about the Catholic Bible to help increase your knowledge and understanding.

1. What exactly is the Bible?

The Bible is a collection of books that the Catholic church believes are the inspired words of God. God chose certain men to write these books under the direction of the Holy Spirit for the benefit of all mankind.

The Bible is like a library of books that were written over the course of a thousand years, from about 950 B.C to 100 A.D. It is the most important book that has ever been written in the history of mankind.

The Bible is considered sacred literature because it is the unique revelation of God, is inspired by the Holy Spirit, and it describes God’s plan for our salvation and eternal life. It centers entirely on Jesus Christ, who is God incarnate and the Savior of the world.

2. Why are there two parts of the Bible?

The Old Testament is a record of the old covenant between God and His chosen people. It describes mankind’s preparation for the coming of the Messiah.

The New Testament is a record of the new covenant made by God with the entire human race, through the life, death and resurrection of Jesus Christ, the son of God.

The life of Jesus Christ separates the Old and New Testaments and is the center and focal point of the Bible.

In fact, time itself is centered and measured on the life and death of Jesus Christ and is the basis our modern day calendar.

3. Who is the author of the Bible?

The author of the Bible is God. He revealed Himself throughout mankind’s history by communicating to human beings His merciful plan of salvation.

We know who God is, through both His words and His actions.

4. Why do we think the Bible is the inspired word of God?

The Holy Spirit’s supernatural inspiration motivated the writers of sacred scripture to record the truth that was conveyed to them, in such a manner that could be interpreted correctly and understood by the people of their time and ours as well.

The Bible is like a love letter written by God for His people, through the promptings of the Holy Spirit.

5. Is the Bible free from errors?

The words of the Bible are always true in the sense intended by their human authors. The words that are recorded in the different books in the Bible may contain minor errors born from the culture in which the author lived, or their limited knowledge of the world (such as whether the earth was flat or round for an example).

Many of the stories in the Bible were passed down from generation to generation by word of mouth and were not written down until much later, but this too validates the importance of the words recorded in these books.

The Catholic church has studied these sacred texts for over 2,000 years and understands the historical time periods in which they were written, as well as the background and culture of the biblical writers themselves.

This is why we should rely more on the church’s interpretation of the sacred scriptures, than our own. However, the church does encourage us to read and reflect on the Bible for ourselves as well.

6. What literary forms are found in the books of the Bible?

7. What are the Apocrypha Books?

Non-Catholics usually call the Deuterocanical Books of the Old Testament, the Apocrypha. These are the seven “extra” books that the Catholic Bible contains, but the Protestant Bible does not.

The reason the Catholic Bible has seven extra books, is because when the Catholic church originally put together the 73 books of the Bible, these books were included as part of the canon.

However, when the Protestant reformation occurred, Martin Luther removed these books from the Catholic Bible because he did not believe they were divinely inspired. In recent times, however, many Protestant editions of the Bible now include these books and call them the Apocrypha.

The seven books that the Protestant Bibles do not include are:

HOW THE BOOKS OF THE OLD TESTAMENT ARE DIVIDED

The Old Testament contains 46 books and are divided into three sections:

1. What is the Pentateuch?

These books tell about the early history of mankind and the history of God’s chosen people and His laws. It begins with the divine origin of the universe and mankind, the Hebrew race that came into being through Abraham, and the Hebrew nation under Moses. The remaining books of the Old Testament cover a thousand years of mankind’s religious history leading up to the time of Christ.

2. What are the Historical Books of the Old Testament?

The Historical Books of the Old Testament are the books of:

These books tell the history of Israel, beginning with stories about the promised land, King David, King Solomon, the Babylonian exile and the struggle for freedom under the Maccabees.

3. What are the Seven Books of Wisdom?

The Seven Books of Wisdom are:
Job, Psalms, Proverbs, Ecclesiastes, Song of Songs, Wisdom and Sirach

All of these books except for the book of Wisdom are written in a poetry or verse form. There are expressed through an equal distribution of thought, but in separate lines of verse. They often repeat the same thought using different ways of expressing it and their intent is to teach or instruct the reader. The Song of Songs is more of a nuptial hymn and the Psalms are more of a form of prayer and praise

though. The book of Proverbs are statements on moral matters and the book of Job is a beautiful examination of human suffering and evil.

4. What are the Eighteen Prophetic Books of the Old Testament?

The terms “major” or “minor” do not refer to their importance, but rather refers to the length of their writings. God communicated to these prophets through visions, dreams and ecstasies that were then transmitted to the people through sermons, writings and symbolic actions. There were actually more than forty prophets but only sixteen of them left written records. The main purpose of the prophets were to be the moral and religious teachers of their nation, political advisers to the kings, defenders of the oppressed like orphans, widows and the poor, and they foretold the future coming of the Messiah, Jesus Christ, the son of the living God.

HOW THE BOOKS OF THE NEW TESTAMENT ARE DIVIDED

1. What are the Five Historical Books of the New Testament?

The Five Historical Books of the New Testament are:
The Gospels of Matthew, Mark, Luke and John; and the Acts of the Apostles.

These books provide a record of the life, death and resurrection of Jesus Christ, the savior of the world, and the very beginnings of the Church he founded. The word “Gospel” means the good news of salvation proclaimed by Jesus Christ, especially in the written form handed down to us by his Apostles Matthew, Mark, Luke and John.

Jesus Christ himself proclaimed the good news of God’s kingdom through his life, teachings and good deeds, but most especially through his Passion, Death and Resurrection. The Apostles preached this good news after his ascension into heaven, and began recording these events only 30 years after his death, in the sacred scriptures of the Gospels.

The first three Gospels are very similar to one another and are called the Synoptic Gospels because their composition can be understood in a single glance if they are placed in three columns side by side. The Apostles may have used one another’s writings, but each of the Gospel writers wrote in a distinctly different manner.

The Gospel of John is the last Gospel written, by the apostle John, in the year 90 A.D. It is the most theological of all of the Gospels and is very different from the Synoptic Gospels in the way it is written and it’s content. It is called the Gospel of Love because it clearly emphasizes that God loved the world so much that He gave his only begotten son for our salvation. The entire Gospel reduces the new law, to a law of love.

The Acts of the Apostles is the last Historical Book of the New Testament and was written by Saint Luke. It describes how the early church was formed and spread throughout the world, through the power of the Holy Spirit. It’s account began after Christ’s ascension into heaven and continued until Saint Paul was imprisoned by the Romans for the first time.

2. What are the Twenty One Didactic Books of the New Testament?

The Twenty One Didactic Books of the New Testament include:

This collection of books and letters were written to answer the practical, concrete needs of the early Church. These early documents taught the faith, included disciplinary actions, practical advice, and encouragement for the early Christian churches.

Some of the remaining letters are about Saint Paul’s journeys, captivity and pastoral concerns about the new Church. The Letter to the Hebrews is attributed to Paul and has to do with theology, the priesthood, the sacrifice of Christ, the New Covenant and the Christian Way of Life.

The Seven Catholic Letters were thought to be addressed to the Church in general, rather than the individual Churches. They encourage the Christian way of life by stressing good works, the joy of baptized Christians and the unity of the faithful. They also refute false doctrines and encourage faith and love for God, especially emphasizing that God is love, and is personally encountered through Jesus Christ. The Seven Catholic Letters also answer specific questions and urges the early Christians to remain firm in their faith.

3. What is the Prophetic Book of the New Testament?

The Prophetic Book of the New Testament is the Book of Revelation and is considered the most mysterious book in the Bible. Even though this book is called a prophetic book, it is more properly understood as an apocalyptic book. The book of Revelation cannot be adequately comprehended unless you understand the historical context in which it was written. Like the book of Daniel, it was composed to meet a crisis in the church which was the persecution of the early Christians. The harlot Babylon symbolizes the pagan city of Rome which sits on seven hills.

The Book of Revelation encourages Christians to stand firm in their faith and avoid compromising with non-believers. We are to wait for the fulfillment of God’s promises. Although the triumph of God in our world remains a mystery to be accepted through faith and looked forward to in hope, it is a triumph that continues to unfold in the lives of each individual Christian, who professes Jesus Christ as the savior of the world. The ultimate salvation of mankind and victory of Christ will take place at the end of the present age when Jesus Christ will come again in glory, defeating Satan and his followers and ushering in the everlasting reign of God.