Julie is a versatile singer, actor and writer who has performed professionally throughout the Mid-Atlantic, at venues as varied as Germano’s Cabaret, Olney Theatre, the Maryland Renaissance Festival and Annapolis Opera.

Julie is Co-founder and Executive Director of New Moon Theater, a non-proﬁt touring theater and opera company for young audiences, presenting over 800 performances since 2006. For New Moon Theater, she has created and performed original scripts, as well as solo adaptations of traditional folktales.

As a teaching artist, she conducts classes in drama for children at area schools, has a creative partnership with Port Discovery, and is on the Maryland State Arts Council’s roster of Artists-in-Residence. For more mature students, Julie is a popular lecturer on American Musical Theater and the American Songbook at life-long learning centers throughout the region.

She teaches voice at Loyola University Maryland, and has been the cantor at St. Ignatius and the Radio Mass since 2004.  Julie is a graduate of Northwestern University (BM) and the Peabody Conservatory (MM) with degrees in Voice Performance. 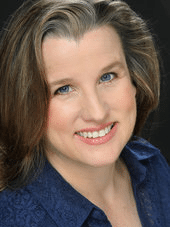