St. Ignatius is one of Baltimore’s oldest Roman Catholic churches, constructed in 1856 as an addition to Loyola College and High School and known as the College Church.

The purpose of a large church building was to develop a parish of sufficient size and wealth to support an educational institution, which would, in turn, develop an educated Catholic population.

St. Ignatius differed from other churches of its time because it wasn’t founded solely by Catholic immigrants, but by both native-born and Irish immigrants.

The elaborate church building promoted a sense of pride and security for a religious minority.

In 1922 Loyola College moved to its present Evergreen campus and in 1933 Loyola High School moved to its Blakefield campus. The Loyola complex, once the headquarters for the Maryland Province of the Jesuits, today houses Center Stage, Maryland’s state theater. 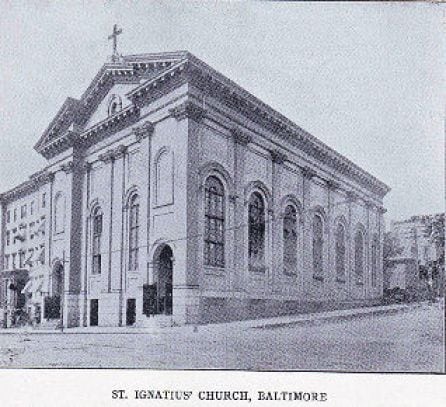 Louis L. Long was a popular Baltimore architect who executed several notable brownstone buildings in Mount Vernon, including 105 West Monument Street and “Brownstone Row,” 18-28 East Mount Vernon Place. The cost of the land parcel was $23,333. The entire cost of the church and college was $89,000. A private Bank, the Associated Professors of Loyola College, was created to finance the construction and functioned as an investment tool for parish members.

Many of the construction contracts were given to parish members. The parish traded waiver of pew rents and tuition costs in exchange for labor on the church’s construction, thus reducing construction costs. The debt was assumed by the Society of Jesus so that the church could be consecrated when it opened (Catholic churches are dedicated but not consecrated until they are debt-free).

In an extensive 1884 remodeling, stained glass windows by Redding, Baird Company of Boston were installed. The mural on the ceiling “Assumption of the Blessed Virgin into Heaven” by William Lamprecht was added, possibly replacing an earlier mural by Brumidi, the muralist for the Capitol in Washington DC. A new spirit of restoration infused the 1998/1999 $1.7 million renovation project, which restored and/or replaced architectural details so that the church’s interior again glows with color and light as originally designed. The narthex was created at the same time, carefully designed to blend with the original architecture.

The exterior design of the St. Ignatius Church is the typical Italianate style of the brick row houses being constructed in Mount Vernon in the 1850s. It is Neo-classical in its symmetrical composition. The baroque interior design was inspired in the late renaissance/baroque model of Vignola’s The Gesu, 1568, mother church of the Jesuits in Rome, as are many Jesuit churches. The Baroque interior decoration is a surprising contrast to the chaste classical style of the exterior. Filled with color and light, the bold decoration of the sanctuary conveys a rich and active interior space that soars upwards toward the heavens. There are no internal columns to divide the space.

This new parish spoke of the coming of age of Catholics in Baltimore. In a city where Catholics clung to the edge of social respectability, they created their own social order, their own goals and expressions of personal improvement, and their own vision of their place in the American Republic. In 1853 The Maryland legislature granted a charter of Loyola, allowing it to grant college-level degrees. The school grew rapidly, and by1855 the new building was opened on Calvert Street, only a block from the Calvert Station, the southern terminus of the Baltimore & Susquehanna Railroad, on the corner of Calvert and Franklin Streets, allowing easy access to the school’s new location. The College Chapel was an integral part of the school, serving both as a place of worship for students and as a parish church.

Although black Catholics worshipped in the main church for the first year after it was opened, on September 20, 1857, the basement or lower church became the Chapel of the Blessed Peter Claver with services held specifically for the African American members of the parish on Sundays and some other occasions. While still within the walls of St. Ignatius, this became a canonically distinct parish with jurisdiction over “the whole colored population of Baltimore in the same manner as the pastors of German churches.” In 1863 the old Universalist Church, at Calvert and Pleasant Street, was purchased by the Fathers of St. Ignatius’, and dedicated under the patronage of St. Francis Xavier as the first Catholic Church in the United States especially for the African American community.

The organ still in use today was originally built in Boston in 1860 by William D.D. Simmons, making it one of the oldest organs in Baltimore. It was completely renovated, rebuilt, and restored in 2010 by Patrick J. Murphy & Associates, Inc. of Stowe, PA.

The paintings in the church are original decorations. The painting over the altar is “Mystical Vision of Saint Ignatius at La Storta” by Constantino Brumidi, artist of Washington’s Capitol Rotunda. It was presented to the church by Brumidi on December 3, 1856. The two other paintings, “The Sacred Heart” and “St. Aloysius” are attributed to Brumidi.

While the paintings were not the work of local artists, much of the rest of the church decorations were accomplished by congregation members. ‘The high altar and sanctuary flooring were the work of master marble artisan Hugh Sisson. Sisson’s marble yard was located just around the corner from the church at Monument Street and Guilford Avenue. His stone cutters produced many of the white marble steps so famous throughout Baltimore. The pews are of cherry and were designed by George Frederick, the architect of Baltimore’s City Hall. They were supplied by Henry Jenkins, a Baltimore cabinet-making firm, and added in 1884. 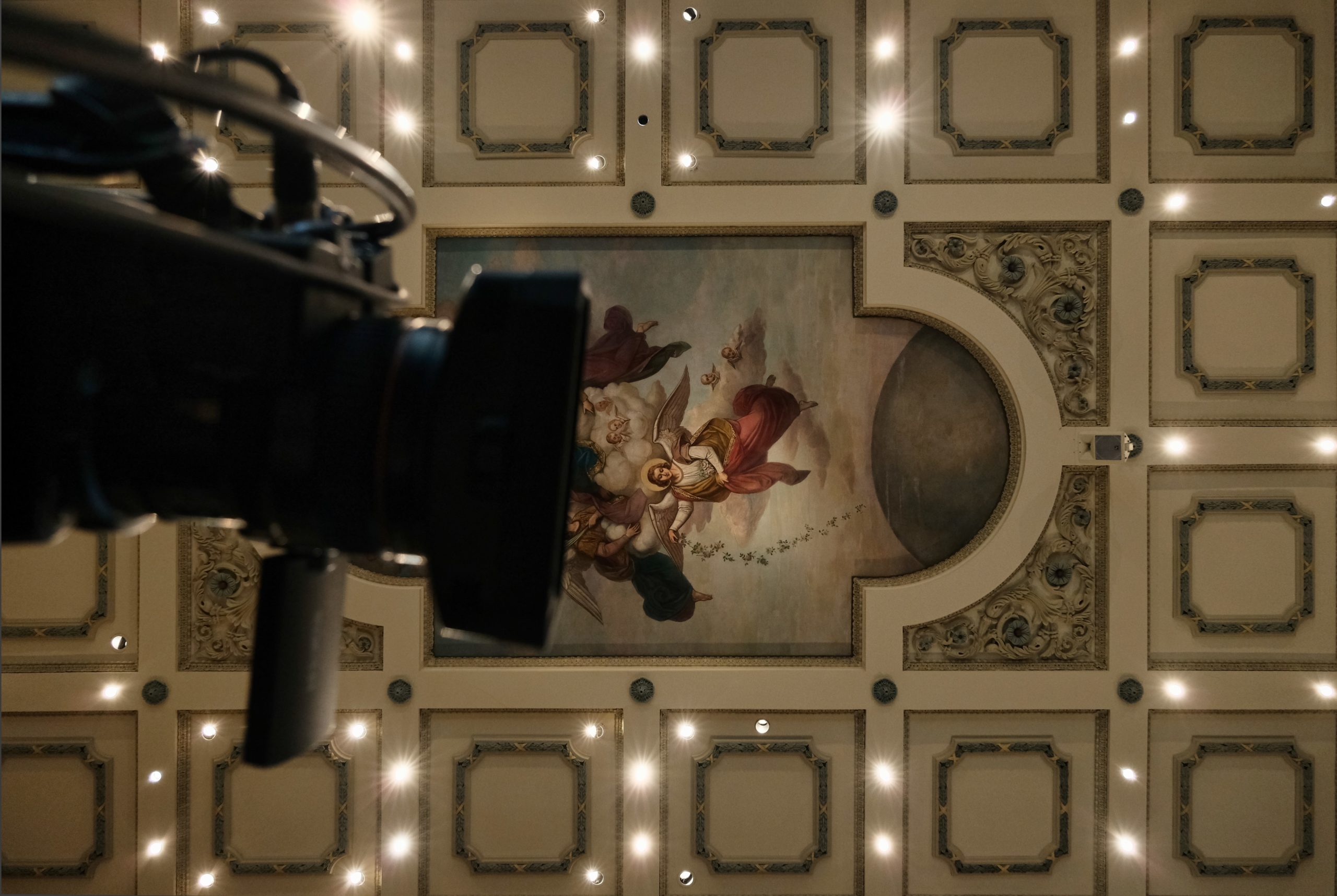 There was discussion of closing or abandoning St. Ignatius in the 1930s, 1970s, and 1990s. Father Wheeler remarked in 1935: “What a change has come over the church since the most glorious days of its life…Nobody cares for a building that is allowed to fall into decay. Here at ‘the college’ because of the declining neighborhood, we need to be more alive to the fact that our church must be kept up better than we have been able to care for it in these several years. It is a landmark in Baltimore; a spiritual landmark and a civic landmark that deserves to be preserved in all its ancient splendor.”

Between 1958 and 1970 the number of worshipers decreased from 1,900 to 600. In l968 the rectory was vacated. Attempts to sell the property in the late 1960s and 70s were unsuccessful. From 1970 to 1974 the buildings (except the church) stood vacant. The St. Ignatius complex was in danger of demolition for a parking lot as the site began to fall into disrepair.

When Center Stage lost its playhouse on North Avenue to a fire, the opportunity arose for them to use the Jesuit buildings attached to the church. Center Stage refurbished the property, turning it into an appealing theater which was immediately adopted by the public. Center Stage began to thrive and St. Ignatius seemed to benefit also.

In 1999, under the leadership of Father Watters, St. Ignatius undertook the most challenging project in its history — the renovation of the 143-year-old church. The spectacular results of this undertaking greet you today. Sunday services were held at Center Stage from June to December, and the church reopened on December 12, 1999.